SIDNEI IS BACK, WITH A BANG!!

In April we had a visitor from Brazil with us and his ambition was to catch some Trout and Pike. He was successful with the Trout then, but the Pike eluded him.

Not one to be beaten, Sidnei came back to Ireland and last week we went to the midlands in search of some Irish Pike. We happened to pick a very windy and wet day, and many times during the day we had to head for shelter as the lough got very rough. the Irish weather did not deter Sidnei and not once did he stop fishing.

We fished in some of the shallower water and even in some of the inflowing rivers and using small Rapala lures Sidnei had a couple of offers, and eventually landed a small jack. He told me he now wanted a big one!!

Out onto the main lough again and we covered a few of the bays with lures, jerkbaits and even float trolled deads. A fish did take a deadbait but dropped it as quick in the rough conditions.

Sidnei and his Big Pike 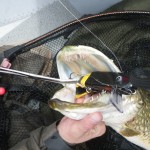 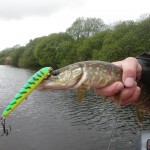 A change of tack was needed and we headed for some deeper water and trolled big crankbaits and spoons. We were seeing a lot of fish on the sonar and a huge amount of them seemed to be shoals of bait fish, probably Perch and Roach. Then, out of the blue, one of the rods buckled and a fish was on. Instantly the fish surfaced trying to spit the lure back at us, and it was a good one.

Even though Sidnei piled on the pressure, the fish put up a great fight, and bored down deep taking line on a few occasions. Eventually, we got it near the boat and soon had it in the net.

Sidnei let a great roar of relief as he was a nervous wreck during the fight, but now at last he had his big Irish Pike. The lure, a Shallow Invader..

She went 21-10 and I am sure would have weighed a bit more a month previous.. A few quick photos, and the fish was back in the lake safely released.

Sidnei now wants to try his luck at some Lough fishing for Trout with the fly. I can see a Mayfly trip on the cards and with Sidnei’s determination I think he might do well. Watch this space!!

With the Mayfly now starting to appear, to book a day with Richie email us at richie@guidefishingireland.com or call him directly on 083 1695975.