Richie is an experienced angling guide based in Ireland, specializing in Trout, Sea Trout, Salmon and Pike.

Richie has fished since childhood, starting on the River Liffey after small brownies, as well as coarse and sea fishing. Richie has also fly fished competitively representing both Leinster and Ireland. 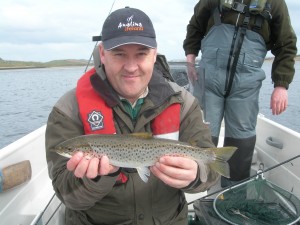 A specimen Pike angler with 3 30lb’ers and over 100 20lb’ers to his name. Richie’s experience and advice are much sought after, and he has been a regular contributor to angling journals for many years. Richie has been involved in an advisory capacity with a number of landmark angling TV series and documentaries over the years. Richie is currently working on a number of angling film and promotion projects with Anglers View Media.

He spends much of the Summer in the West of Ireland in pursuit of Trout on the big loughs, and also in Kerry fishing for Sea Trout. In Winter he can be found around Ireland after big Pike.

When not in Ireland, Richie has travelled and fished as far and wide as Gambia and Spain. However his favorite place is Southern India where he was introduced by John Bailey to the legendary Golden Mahseer.