1st Trout and Pike for Americans.

Posted on May 5, 2014 by RichieGFIreland

Had a few visitors over from the USA in April. Nathan and Rachel from Texas had just been married and were on their honeymoon in Ireland. Both keen hunters,they were keen to try out some fly fishing on some of our smaller Rainbow Trout fisheries.

We went to Southern County Fishery in Co Carlow. Rachel who had never fly fished before took to it well and after a few near misses, landed a couple of good sized rainbows. The fish were in great condition and fought like hell. Nathan joined in too with a few rainbow and brown trout. This is an ideal venue for someone starting off fly fishing.

A few days later I was out pike fishing with Andy Gonzales,a friend of Nathan and Rachel.He is on a month long tour of Europe and was in Dublin for a very short stay.With only a little time,he wanted to try and catch his first Pike.

We chose to fish Blessington Reservoir with its close proximity to Dublin, and luckily the weather was perfect.

We went out from Ballyknocken in the boat and spent the afternoon trolling lures and fishing some of the shallower bays. After a couple of half-hearted takes, Andy eventually latched onto a fish on a Rapala Super Shad, and soon his first Pike was in the boat after a short fight. He was delighted.

A few days later I was there again with 2 great guys from Arkansas, Terry Jerry and Drew Baker. Again they wanted to see a Pike. At home these guys regularly fish for Bass, Walleye and Gar and were very good lure anglers.In conditions that were far from ideal the lads stuck it out and Terry was rewarded with a very long lean Pike which should have been heavier. Obviously she had spawned a while back, but the way she chewed the Shallow Invader lure, she wont be long about packing it back on.

With May now here, I will be busy for the Mayfly, and there are lots of enquirys. I have a few dates still free and anyone interested in a day out can check out availability on my calendar on  www.guidefishingireland.com and mail me with their request.

Southern County Fishery is located near Garryhill in Co Carlow and can be contacted at www.southerncounty.ie.

Again, anyone interested in fishing Blessington from the boat can go to  www.blessingtonlakeboathire.ie for information. Their fleet of boats is excellent and great value. 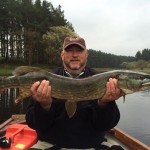 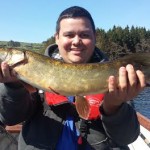 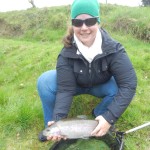