Last week I reported on how Sidnei from Brazil had returned to Ireland to try and catch Pike. This he achieved with a cracking 21 lb 10oz lure caught fish. He loved the midland loughs and fancied another day out and this time for Trout.

During the week, I took him to Lough Sheelin for a days fly fishing. Timing seemed just right, for soon after we got out onto the water, we were seeing plenty of Mayflies.

As Sidnei had never fly fished a lough before, only small rivers, we started off fishing dry flies in the shallower end of the lough from Finea to Derrysheridan. Before we even started fishing we saw an angler playing a good fish and Sidnei was keen to get started.

Even with a good steady stream of fly coming off, we saw very few fish taking them on the first 2 drifts. Then the wind increased, and we decided to change tack, and fish wets. Fishing a dark green Gosling on the bob, and a brighter wet mayfly on the point Sidnei hit his first fish after only a few minutes. The fish slammed into the bob fly as he dibbled it fast towards the boat. The fish looked like a nice one, and put up a great scrap, putting a big smile on Sidnei’s face when it hit the net. His first Irish lough Trout, weighing about 2.75 lb. A few pictures and the fish was returned.

All afternoon, we continued the drifts over shallow water, and on each one Sidnei turned a fish. He seemed to be taking to this style of fishing very well and by lunchtime he had 2 fish landed and another lost.

He also wanted to try the dap, but despite several attempts he did not turn a fish. Another change, Sidnei went back onto the dry fly, and a detached body Wulff soon accounted for a nice fish of about 2 lb. This fish had taken a fly well ahead of the boat and was covered quickly,and the cast was obviously spot on as he took straight away.

The wind increased even more towards evening and the wet fly was tried once more, resulting in 3 more fish landed and another 3 missed. Two of these fish landed fell to Sidnei’s rod, showing how well he was doing at his first day lough style fishing.

By the end of the day, with no sign of  the wind dropping and little chance of Spent going out, we headed for home.

Sidnei finished with 5 Sheelin Trout on his first attempt, a great result I think on any Irish Lough.

A permit is needed for Lough Sheelin and this can be purchased at the local IFI office on the lough.

Sidnei cannot wait to have another try when the Spent fishing comes on, but he has other goals too, some fly caught Pike, and some Bass in Kerry when the season re opens. The man has a bucket list of fishing and so far is ticking all the boxes!!

Next week I am off to Sheelin again, then to Carrowmore for Salmon and then Mask and Corrib for Trout.

To make a booking with Richie contact him at richie@guidefishingireland.com 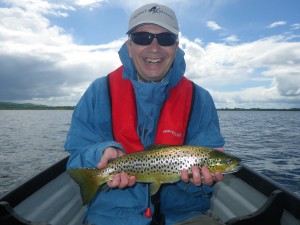 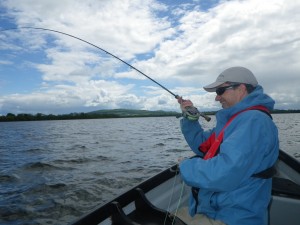 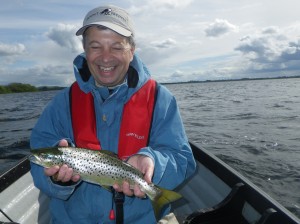 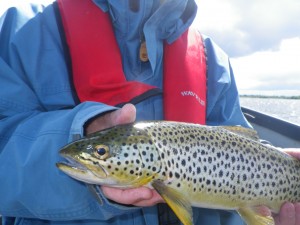 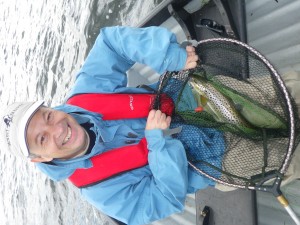