Posted on June 3, 2014 by RichieGFIreland

We had a number of guests lately and spent a great deal of time up on Lough Sheelin. The lake seems to have fished great for the past month and luckily when we were there, at times the fishing was excellent.

First up was Sidnei Boff, who did well on Sheelin in early May fishing wet flies. This time he wanted a fish on the dries. When we were there the mayflies were hatching well, and we came across a number of fish feeding. But conditions were not great with drizzly rain and a cool breeze coming and going most of the day.

After a few fishless drifts, Sidnei mentioned he wanted to try for a Pike on the fly. We headed for a quiet shallow bay and armed with a 9wt fly rod and a large Streamer, Sidnei soon had a fish of about 5 pounds. He had great sport on the fly gear and it is something he wants to try again. A drift in the evening resulted in a trout on the spent and another few missed. Just as the spent were starting to come out the heavens opened and put an end to it. 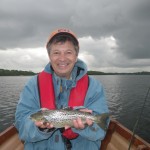 A small trout on the spent. 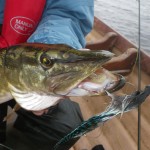 Another guest Azim from Mauritius arrived and he got the timing just right. We stayed in the revamped Crover House Hotel on the shores of Sheelin and what a great base it is. Some of the days we fished wets in the big wave and Azim enjoyed this, taking a few fish, but he really loved fishing the dries. Some wonderful fish were up on the feed and he took fish on both greens and spents. After a few days, Azim set up an 8’6″ rod rated for a 4 and had some great sport with it. Fishing a single spent this dealt with fish up to 3 pounds very well.

We had a real good session one morning when we went out at 7am and the fish were taking greens hatching as the day warmed up and Azim took fish of 2, 3 and 3.25 pounds. He returned every fish he caught for the 5 days and is  dying to return later in the season. 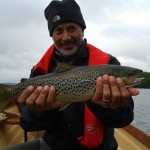 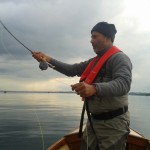 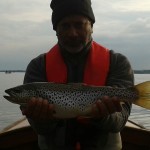 Azim with a Sheelin beauty.

We have had good interest in our September Shark trip to Cork and have a couple of places left. For details contact richie@guidefishingireland.com