Posted on September 25, 2014 by RichieGFIreland

One of the most enjoyable trips each year for me is getting out to sea and this season we headed for Cobh in Cork. Mid-September saw the weather gods on our side and we had calm seas and warm sunshine. Our target was Blue Sharks and confidence was high as we were skippered by Jim Linehan onboard his boat Deora De. 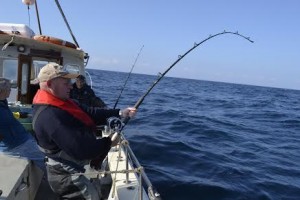 Jonnie Reddin into a 67lb Blue

We fished the first day a few miles outside Cork Harbour and it seemed to be full of Mackerel and we had no trouble getting plenty of bait. Every drop we had numbers of fish, although lots were small. With enough in the barrel for the shark rubby dubby, we spent a lovely afternoon fishing for a multitude of species along reefs and over broken ground. It was great to see so many Cod which seemed to be very plentiful. Other species caught were some good Pollock, Gurnard, Wrasse, Pouting, Herrings, Scad, Ling and some good sized Whiting.

The next day we were on the water for a 20 mile trip out to sea to  the deeper water. Jim said the conditions were good but he was hoping for a little more wind. The last thing we wanted was a flat  calm as you need the boat to be moving on a steady drift so as to let the rubby-dubby slick draw the sharks in from a far. 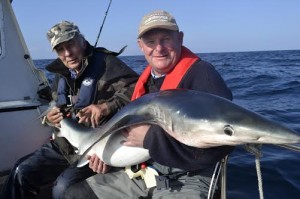 On route we caught some fresh Mackerel for hook baits. After nearly 2 hours we were on the deep-water mark and thankfully had a steady breeze moving us along. Soon, we had the mixture of mashed fish, oil, blood and bran hanging over the side in a mesh bag and the slick it created was very good. Now, it was just a waiting game, with 4 rods out suspending Mackerel baits at different depths.

It was 1.5 hours before the first run and it was a screamer. The fish took line at great speed and John Mullins was well bent into it. For the first 15 mins or so the fish stayed well out and deep. John, who has 2 artificial knees and an artificial hip coped well and used his butt pad to help with the strain. Jim even used a rope and strapped him to the rails as his balance went after 30 mins. We knew the fish was a good one, and when he got it boat-side Jim and myself landed it by hand and into the boat.

It certainly was a good one,and the hook fell out immediately the line went slack. Jim quickly measured the length and girth and calculated the fish to be 96 lb. John was delighted with his first Shark and after a few pictures the fish was returned. 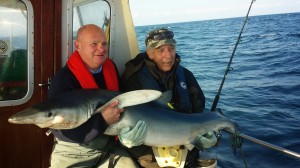 More action soon followed with several fish hooked and lost and another good fish of 67 lb coming to Jonnie Reddin.

At one stage in the afternoon, we had 6 or 8  Sharks swimming around the boat and Jonnie dropped a bait in front of one and landed it, a male of about 20lb.

I hooked a fish about 5 o clock and Jim knew from the off I was into a good one. The power of the fish was immense and it took some great runs of 50 to 100 metres. It was another 40 minutes before we saw the fish and after 4 attempts Jim eventually got the fish on board. Again the hook was out easily. Jim tells us he now crushes the barbs on the hook to make unhooking faster.

After measuring and tagging we had time for a couple of pictures. The fish was 106 lb and very long. 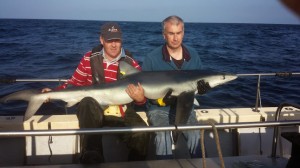 Later on we had a fish take a bait that nearly emptied Jim’s 6/0 Senator reel in seconds. Jim is convinced it was not a Blue Shark, and might have been a rarer Porbeagle. It literally went over the horizon in a flash. We would have loved to have seen that one.

The lads all enjoyed the weekend and already are booked for next season.

Anyone interested in joining us on the trip can mail  us at richie@guidefishingireland.com