No Luck on Mask

Posted on November 26, 2013 by RichieGFIreland

Normally on a trip to Lough Mask or Corrib you are met with plenty of wind and rain. This is sometimes good for the fishing. Last weekend I took a small group over for a few days pike fishing. Surprisingly, for the whole trip the loughs were as flat as a millpond.

We had 4 anglers fishing from 3 boats. On Sunday morning we set out on Mask and started out trolling lures. One boat stayed in the deeps with large lures trolled up to 30 ft down. Another fished shallower water and it was them who hit the first fish. Mick had a pike of about 7 or 8lb on a trolled spoon. Within minutes he hooked another but it came off. A great start, we thought.. how wrong we were!!

We didn’t have another offer until 4pm when John had a small fish on a large plug. One of the lads tried float trolling deadbaits and did have a few dropped runs but the fish were very moody.

Day two was similar. Again Mick hooked 2 fish but landed neither. One interesting catch was a dead trout of around 4 lb, which a large deep diving plug hooked onto while near the lake bed. I am sure it was a lovely fish in its day. We fished until dark but had no other action from pike, although Paul did have some perch while drop shotting in the deep water. Other  anglers we met had similar results. Most put it down to the sudden change in weather and pressure. Before we left we did meet one angler who did have a fish of over 25 pounds. No matter there’s always next time.

Both nights we had a great time in Eddie Lynches Fairhill House in Clonbur, and as usual the food was superb. We are back again on Dec 8/9th. There is a couple of places available and details can be obtained by mailing richie@guidefishingireland.com 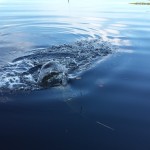 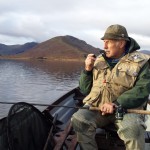 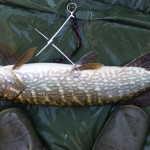 This entry was posted in Guiding. Bookmark the permalink.
Follow