Posted on December 10, 2013 by RichieGFIreland

A few days ago I was in the west again with some anglers in search of Pike. Our targeted locations were out of sorts with some extremely stormy weather and the big loughs were very rough.

Solely for the purpose of getting some shelter and some comfortable fishing we decided on a change and headed back to the midlands and the Shannon and some of the loughs on it. Although big waters too, they are much more manageable than Corrib and Mask. For one of my guests it was a day to remember.

Daniel is from Canada and is working here for the next year. At home he is a keen Musky angler and also fished for Bass. Because of this he has a love for lure fishing, and was keen to try it out for Irish pike,along with dead baits which he had never used. His target was to catch a fish of  over 10 lb.

The day started with some trolling off a few small islands with various shallow diving plugs,as the water was only 8- 10 ft deep. We tried several areas like this with no luck, so it was decided a move to some deeper water was on. I trolled for a while, always watching the sounder and soon came  across a nice drop off and plenty of bait fish showing too. I dropped the anchor and put out a couple of deadbaits, while Daniel fished lures over the area. Within a few minutes he had a follow and soon hooked his first Irish pike. This one was only a jack of 3 or 4 pounds but a start. Soon after, we had a fish splashing at our floats a number of times. Quickly, Daniel put up a black and orange grub bait and twitched it over the fish, and within minutes hooked and landed it, slightly bigger at 6 or 7 pounds.

We then had a few hours of quiet, during which we trolled deadbaits and lures in some terrible squalls. At 2 o clock I suggested we move off the lough and try a stretch of the river.

In summer it is very busy with cruisers but now we had the river to ourselves. One part we found looked very fishy, with lots of weed and what seemed to be huge shoals of bait fish underneath us. I put the boat right in tight to the bank and dropped the anchors down and we were able to fish only a few rod lengths out. I only had the second rod out and I thought a fish was at the bait, again another jack. Then as I looked around the first float was sailing away, the full Herring. Daniel hit the fish straight away and right from the off we knew this was a better one..The rod doubled and the fish fought hard in the weedy water. Was this the double he so wanted? It was more than that, and as the fish tail walked right beside the boat, Daniel let out a shout. He played the fish very well and soon we had her in the net.. A real beauty!!

We quickly got out of the boat and weighed and measured the fish on the bank. Length 41.5 inches and 22 lb on the nose. Daniels biggest ever fish.

A few quick pictures and the fish swam off strongly. We must have dropped right onto the bait fish and the pike were obviously on them too. Daniel was thrilled and cannot wait to get back out again.

What started out as a disappointment with the weather out west, turned into a success after the decision to move. 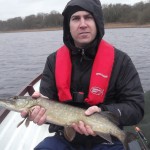 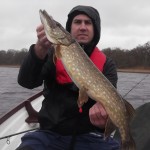 This entry was posted in Guiding and tagged River Shannon. Bookmark the permalink.
Follow