Posted on September 4, 2013 by RichieGFIreland

Back a few weeks, I was in Kinsale for a day out on the Silver Dawn. A superb charter boat based, skippered by Mike Dennehy this is possibly the finest boat I have fished from in Ireland. The day was set to be wreck fishing over 30 miles from port, and even with a fair sea, we hardly felt a bump on the way out.

We were filming a piece with Anglers View Media and Inland Fisheries Ireland, for a promotional film they are doing. Onboard there were some well known and experienced anglers.The Irish Ling record holder Ailbhe O Sullivan who caught a massive 55 lb Ling in 2004, and Mike Hennessy from IFI.

We were all looking forward to getting to the wrecks and skipper Mike had one particular one in mind. But excitement turned to frustration as when we got there we came across nets, laid by trawlers, making the wreck un-fishable. Not to be out done, Mike went on to find another wreck later in the morning.

When we started, Mike Hennessy showed us some popular rigs, and it was not long before he was into a fish. Beside him another angler was hooped into a fish. Bringing large fish up from nearly 400 feet is hard work. Mike landed his fish, a Ling in double figures but the other angler had his fish “bitten off” by a shark as it neared the surface. Throughout the day the Ling kept biting and  the team landed over a dozen fish, but none of the hoped for monsters that frequent the wrecks. They were certainly camera shy.

On the way in we came across a pod of dolphins and porpoises, two hundred or more, and just when we were finished filming these, a pair of Fin Whales appeared only 100 metres from the boat. This was a sight to remember. 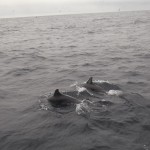 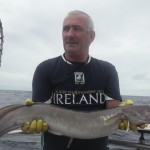 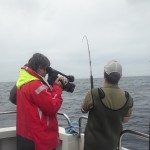 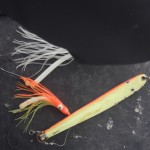 As soon as the weather settles again and the winds drop down, we will be back down to Kinsale once more, this time hopefully the big fish will play ball.