A couple of weeks ago I was out with regular visitor Azim. We tried several waters and he really took a liking to Lough Sheelin. He had hoped to fish it in the Mayfly but weather at the time put the hatch off by a few weeks.

This time the weather was warm, calm and very sunny. The wind was up and down, and from fishing in a small ripple we went to stalking fish in a flat calm. Although sedges were very plentiful, we found the fish were not interested in them.

As the evening drew to an end, we came across a few fish chasing fry. The water was erupting every few minutes as the fish hammered into the small perch and roach. Azim took down the dry sedge and quickly tied on a pearly invicta, a great all-round fly. Drift after drift he put it right into the fish ahead of the boat. There was so many fry on the surface it was hard to see how they would take his, but persistence paid off, and he lifted into a lovely fish in shallow water.

Azim is used to playing big fish in saltwater back home in Mauritius, but this fish fought every bit as hard. After some really long runs, the fish bore down hard under the boat, but was eventually netted, and looked good. The fish was unhooked, it was Azim’s best fish to date in Ireland, and weighed 5 lb 13 oz. A few days later, he was fly fishing in the sea again, not in Mauritius, but for Bass in Co.Cork. More later. 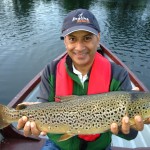