Posted on October 25, 2013 by RichieGFIreland

Recently I took an angler from France out for a days pike fishing. We had intended on fishing a midland river but heavy rains the day before put the levels right up. On the morning we went, we had a look at a few spots and they were running high and chocolate brown.

We then turned to Plan B, one of the many loughs in the midlands. Stephan normally fishes with lures and was keen to try dead-baiting, and float-trolling in particular. This is a favorite method of mine, especially from the boat on the bigger waters.

We eventually were afloat by 11am ( late for me ) and we started trolling roach and perch, as this water is full of both. We trolled all along areas close to reed beds and islands. Usually a model for fish, this area produced nothing. On the echo-sounder I came across a small rock pile out in deeper water in the afternoon and a big bed of weeds beside it. I changed over to some bigger baits, a mackerel on one, and a herring on the 2nd.

Two minutes into the next troll the mackerel was away, and we had a nice double in the boat. The fish fought very strongly and gave Stephan a great aerial battle, jumping several times.

Then we had the biggest shower of rain I’ve seen in a very long time. Stephan was keen to keep going and in the next half hour he landed another brace of doubles with the best going about 13 or 14 pounds, both on trolled mackerel. At 5pm we called it a day and Stephan was thrilled with how the day had gone. Despite all the the Irish weather could throw at him he had landed his first Irish pike and doubles at that. [whohit]-Frenchman lands First Doubles-[/whohit] 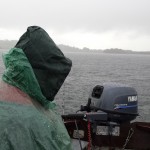 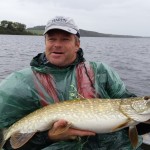 This entry was posted in Guiding and tagged echo-sounder, trolled mackerel. Bookmark the permalink.
Follow