The months of January and early February were awful with so much water spoiling the fishing. We had a client over from America just when the waters started to drop off. Anietra has fished in many countries, most recently in Thailand for the hard fighting Mekong Catfish. She was keen to try her luck with some Irish Pike, and luckily the fish played ball. Finding areas to fish were difficult, with lots of the river systems and lakes too full of coloured water.

Being based in the midlands Anietra was lucky to have some smaller waters nearby that were not fed by major rivers and therefore were high, but clear. Along the shoreline there were a lot of boats totally submerged,giving an indication of just how much rain we had. In the morning out we fished from the boat and had some great success on both wobbled deadbaits and also float trolling. The first fish Anietra hooked we never got to see, as after a short fight it threw the hooks. It seemed to be a good one.

Not put off, another bait was soon out and Anietra had a screaming take, again on a wobbled Roach. After a dogged fight in the deep water, I put the net under a beautifully conditioned fish. In a minute she was in the weigh sling and turned the scales to a shade over the magical 20 lb mark at 20-02. A quick photo and she was away to the depths once more. 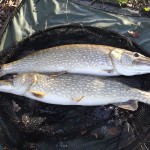 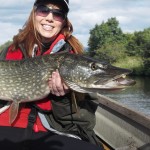 During the day another few fish followed, also on wobbled baits, coming in at 17lb, 8 lb and 14 lb. After lunch, we tried the fly for a while and also pitched a few lures but had nothing at all.

For the last hour we trolled dead baits and lures in the deeper water and after 2 hours of no action, we had 2 takes at once on the deads. I handed Anietra the first rod and she soon was bent into what seemed like another decent fish. I too, was playing a good fish on the 2nd rod. I got the net quickly under Anietra’s, and then played the other fish which was fighting hard in the now windy weather. Once landed, we pulled the boat into a small island to take a few pictures. Anietra’s fish went 17 lb 8oz and mine went 20lb 7 oz. It was a great end to the day.The last fish of 20 lb 7 oz had a slight pug nose, quite a common thing on the fish on this system.

I was back a week later and the lake had dropped a few feet and this time all I had was a couple of Trout while trolling lures. Not a sign of a Pike.

This entry was posted in Guiding and tagged Mekong Catfish. Bookmark the permalink.
Follow